Seo Blog Video You'll Cry Tears of Joy When You Learn how Easy Viral Videos Can&nbspBe
By jennita On April 1, 2014

Today, I'm super-excited to introduce our latest product from Moz, MozWorthy! It's a tool that takes your regular (perhaps even boring) videos, adds some "oomph" and pizzazz, and makes it go viral.

With so much talk about content marketing on the rise—and guest posting on the decline—we wanted to build something that helps in both instances. You make the video—heck, it doesn't even have to be that great—and we do the rest.

Check out the video we used as the test. What started out as just a regular old video, turned into a HUGE HIT around the world. In fact, it was the original version of the "internet famous" FIRST KISS video.

You can jump in and give MozWorthy! a try now, or read a bit more about why we made it, see some examples, and learn how it works.

At the end of February, many of us at Moz participated in Ship It Week. This was a time when we focused on using all our internal talent, enthusiasm, and fun to collectively come together and innovate. This meant more than just coding and building things, but working to build new ideas, frameworks, and anything else we could imagine to innovate at Moz. MozWorthy! was one of the tools we created.

Our top-rated Ship It Week project is a tool that helps you learn the names of all the Mozzers, called "Name That Mozzer." It was built as an internal tool only, to help staff get to know others on the team. A big thanks to Brandon for all the work he put into making Moz a better place! 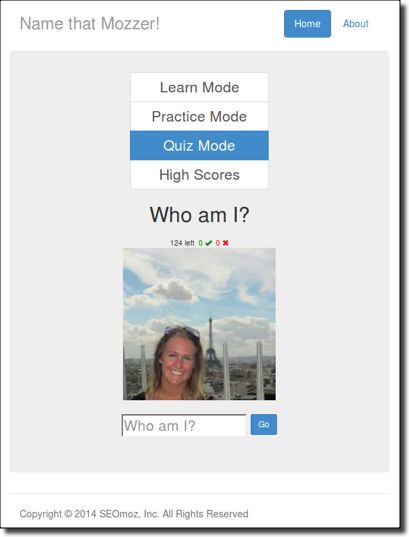 Although that one was a favorite among staff, we knew that several other projects would be used and loved by the community. For example, Peter Bray built Zoom Profiler, a tool that allows users to very quickly analyze a competitor, influencer, or customer to find their most important relationships, their top tweets, and their top content sources. 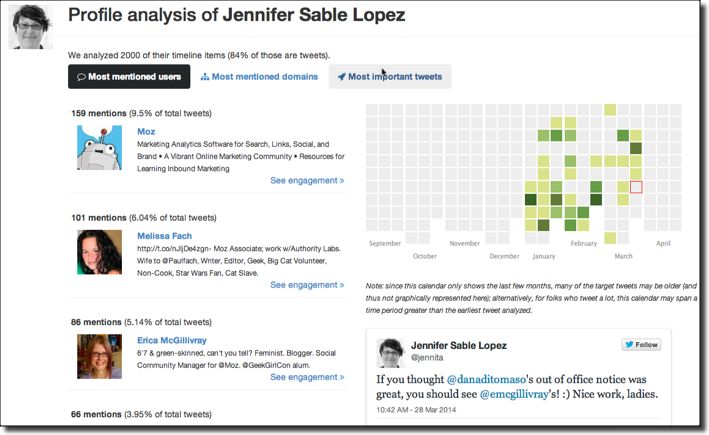 At the same time, Evan came up with the idea of making it easier for people to get their videos to go viral. As a team, we thought our customers would really love it as well, so we jumped in full force: The product, design, dev, and marketing teams got together to create something truly helpful!

Ok, ok, let's get down to the real dirt. How does this baby work?! It's quite simple, and it only takes a few steps to find yourself in viral video world. 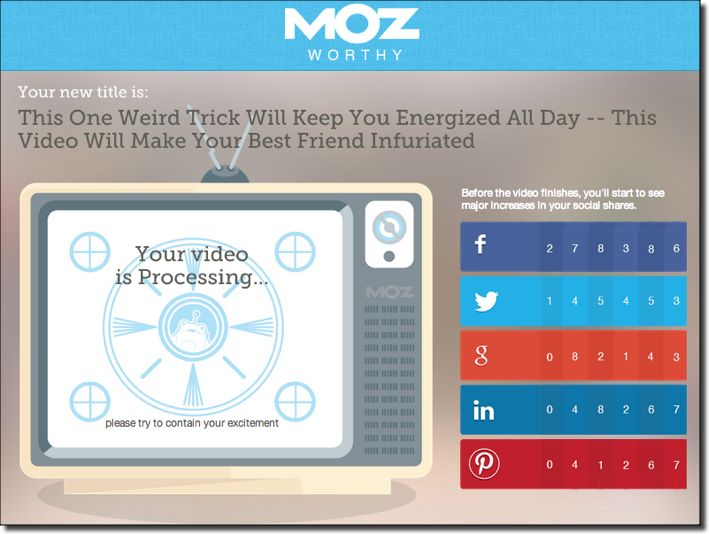 Once you submit your video, we take it and process both the video and title. Using super-special Moz data based on what words are the most clickable and linkable, we create a viral title for you. A combination of your title, attributes you added, and the addition of "highly viral keywords" will be used to make your title as ahhMOZing as possible.

But we don't want to stop at just the title. We also take your video and make enhancements to it that will make people love it even more. Honestly, your video doesn't even have to be all that good, and we'll make it great. I mean, everyone wants to do mediocre work and press an easy button to make it awesome, right?

Creating a great title and updating the video are all good and great. But what you really want is for people to see it, right? Cool. We help with that too. You'll see social shares across all the major platforms (Twitter, Facebook, Google+, LinkedIn, YouTube) go up practically instantaneously.

Ok, I know you all well, and you're not going to settle until you see exactly how it works. Which is cool, so I have a few examples to show you the kind of virality I'm talking about here!

This One Weird Trick Will Keep You Energized All Day

This one is fairly straightforward, but wow, look at that title!


You'll Never Believe What This Former Philologist Caught on Video

This is just a short, simple video as you see. But with MozWorthy! we were able to add oomph to the video, and make the title something that even your grandmother will want to share.

So, what are you waiting for? Go check out MozWorthy! right now, and see what we can do for your social shares!

By Rand Fishkin
From Video

If you have an audience on YouTube, are you doing everything you can to reach them? Inspired by a large-scale study from Justin Briggs, Rand covers the top fact...

By Ann Smarty
From Video

If you're entering the video marketing arena, limiting yourself to YouTube alone isn't a wise idea. But what other options are there, and how do they compare?

By Ann Smarty
From Video

YouTube is a huge search engine in its own right, and growing your presence there can be valuable for your brand, your presence in organic Google SERPs, and mor...

The Twitch Phenomenon: Why Live Streaming Is Worth Your&nbspTime

By Troy Evans
From Video

Hosting live streaming video is an under-explored area of online marketing, and the staggering site analytics from Twitch.tv are proof it can work incredibly we...

Today, I'm super-excited to introduce our latest product from Moz, MozWorthy! It's a tool that takes your regular (perhaps even boring) video, adds some "oomph"...

By Phil Nottingham
From Video

One of the earliest questions considered by any business investing in video marketing will certainly be, “Should I have a YouTube channel?" The answer: probably...

By Phil Nottingham
From Video

Designing and implementing a goal-driven strategy for Video SEO is imperative to its success. In today's post, Phil outlines the core goals video can provide fo...

By Jeff McRitchie
From Video

Have you noticed that more and more video results are showing up in Google search results? Everywhere I turn, it seems that Google is providing me with options...

Did you know that major search engines want you to make video sitemaps for all of your embeds, even if you're hosting on Vimeo or Youtube? Not only does it hel...